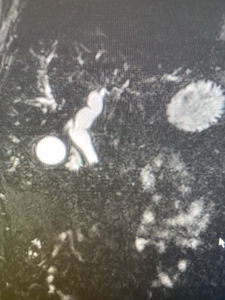 Bile ducts drain bile from the liver and gallbladder to the intestines where they help digest fats. They are usually thin, smooth and uninterrupted tubes or pipes that go from the liver, gallbladder and to the intestine. Sometimes the pipes can get dilated for various reasons such as a blockage, infection, pancreatitis, functional problem, and medications. Sometimes patients can present with jaundice or yellowing of the skin and eyes and lab abnormalities.

An MRI that is specially designed to look at the bile ducts called an MRCP is often ordered to take a closer look. This is commonly combined with a more general MRI of the abdomen. This is often done because you have jaundice, lab abnormalities, imaging abnormality on another type of test such as ultrasound. The MRI of the bile ducts will outline them as bright and allow best to see abnormalities.

Most commonly, I see this ordered to look for stone or tumor. Sometimes there can be a stone in the bile duct which can cause a blockage, pain, jaundice, lab abnormalities and risk for infection or cholangitis. This will look like a dark round spot in an otherwise bright duct. A special procedure is often done called an ERCP to remove the stone.

Tumors or cancer that cause blockage of the duct is another common cause. This can occur anywhere along the course of the ducts, but is especially common in the region of the pancreas. The duct passes through a part of the pancreas called the head. A tumor of the pancreatic head will cause the duct to be obstructed. A tumor of the bile ducts called a cholangiocarinoma will also block the ducts. In these cases, sometimes a tube or stent will be placed to relieve the blockage by a specially trained doctor.

Dilated bile ducts can also be seen with chronic use of opioid medications, such as those taken for chronic pain. This can also be seen when the muscle along bile duct near the intestine causes a blockage. This is called sphincter of oddi dysfunction. Perhaps the most common benign condition to cause a dilated bile duct is simply having your gallbladder out or cholecystectomy. Often, when the gallbladder is removed, the bile duct becomes dilated because you no longer have the gallbladder as a storage for bile.

The imaging finding of dilated bile ducts has many varied causes. Often your clinical presentation will help guide further testing and the most likely diagnosis. Imaging will also often make a precise diagnosis, especially with conditions like stone in the bile duct or tumor causing a blockage.

Sometimes imaging tests will not detect the cause of the blockage even though there is one. In these cases, a more invasive test called an ERCP is done to look at the bile ducts. This allows direct visualization, biopsy and even therapy such as relieving the blockage or placing a tube or stent to bypass the blockage.

Please read the disclaimer KUB X-ray stands for kidney, ureter and bladder X-ray.   This is an X-ray that may be the first step in diagnosing a condition of the…

Please read the disclaimer Focal colonic thickening on CT is common and has multiple causes.  Focal thickening involves a short segment of the colon.  The thickening may or may not…

Please read the disclaimer The best test to evaluate the gallbladder is usually an ultrasound.  While many other imaging tests are able to identify abnormalities, ultrasound is the best test…

Please read the disclaimer Bleeding in the abdomen can occur from a variety of causes which CT can often identify.   Blood on CT will be brighter than simple fluid….

Please read the disclaimer Pancreatic mass is an abnormal growth in the pancreas which is identified on CT. There are many different kinds of masses which can be identified. The…

Please read the disclaimer Kidney or renal stone CT for flank pain is one of the most common orders I see for CT, especially from the emergency room. This is…