Ultrasound is commonly done to evaluate an early pregnancy.  This is pregnancy in the first trimester or first 12 weeks.  Ultrasound uses high frequency sound waves to create an image.  There is no radiation use.  Ultrasound is done by a specially trained technologist.  The pictures obtained will be sent to a radiologist who interpret the images and create a report which will be sent to your doctor.

Early pregnancy ultrasound will allow us to see the fetal number and how far along the pregnancy is.   It will determine if the pregnancy is in the uterus or next to it which would be an ectopic pregnancy.  Around 4-5 weeks, a gestational sac will be seen.  The fetal pole may be seen around 6 weeks.  A heart rate will usually be identified above 100 beats per minute.  The rest of the uterus and ovaries will also be evaluated.

A common reason for imaging in early pregnancy is vaginal bleeding.  This can be seen with subchorionic bleeds.  These occur next to the gestational sac in the uterus.  They can be of various sizes and the larger the bleed, the more threat there is to pregnancy failure.   Many times, these are of no clinical consequence if there is a heart activity seen.  They will often resolve over time.

Early pregnancy ultrasounds are also done for suspected ectopic pregnancies.  These are pregnancies outside of the normal uterine cavity.  Patients can present with pain and bleeding.  Most ectopic  pregnancies occur in the tubes.  Ectopic pregnancies can occur more rarely in the cervix, the ovaries and the abdomen.

On ultrasound, the uterine cavity will fail to show a preganacy or show a fluid in the uterine cavity called a pseudogestational sac.  Most commonly, there will be free fluid in the pelvis. a cyst or mass next to the ovary where the tubes are, and something called a ring of fire sign.  This will be blood flow around a cyst or mass in the tube.  A live pregnancy outside the uterus will be seen in a minority of ectopic pregnancies. 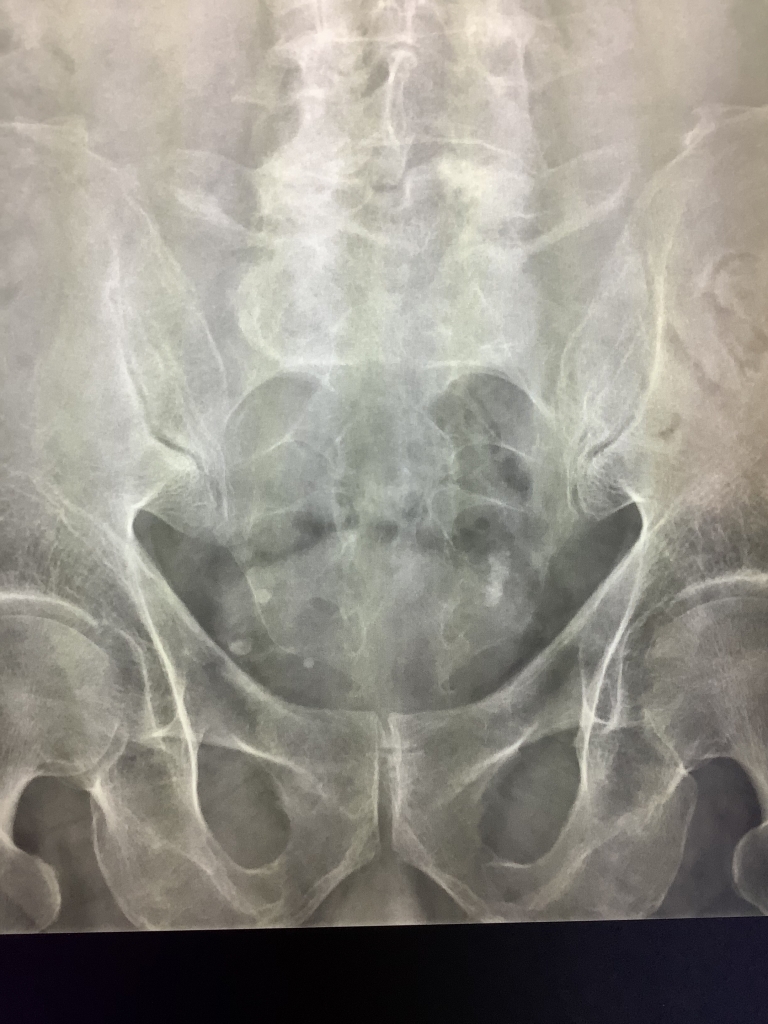 Please read the disclaimer Perhaps one of the more common findings is small little white spots or calcifications in the pelvis on X-ray.  Your radiologist will often call these phleboliths. …

Please read the disclaimer MRI of the prostate has become a common test ordered to look for cancer of the prostate.   The test is read by a radiology doctor…

Please read the disclaimer Fluid collections in the pelvis can occur for a variety of reasons.  Some of the reasons are benign or normal and others indicate the presence of…

Please read the disclaimer Ectopic pregnancy is a pregnancy that occurs outside the uterine cavity.  This most commonly occurs in the Fallopian tubes.  Other less common places include the cervix,…

Please read the disclaimer Rectal thickening on CT means that the wall of the rectum is thicker than usual.  This is a subjective findings for which the radiologist uses his…

Please read the disclaimer Prostate cancer is one of he more common cancers found in men as they get older.  Unfortunately, most prostate cancers can not be seen on CT….